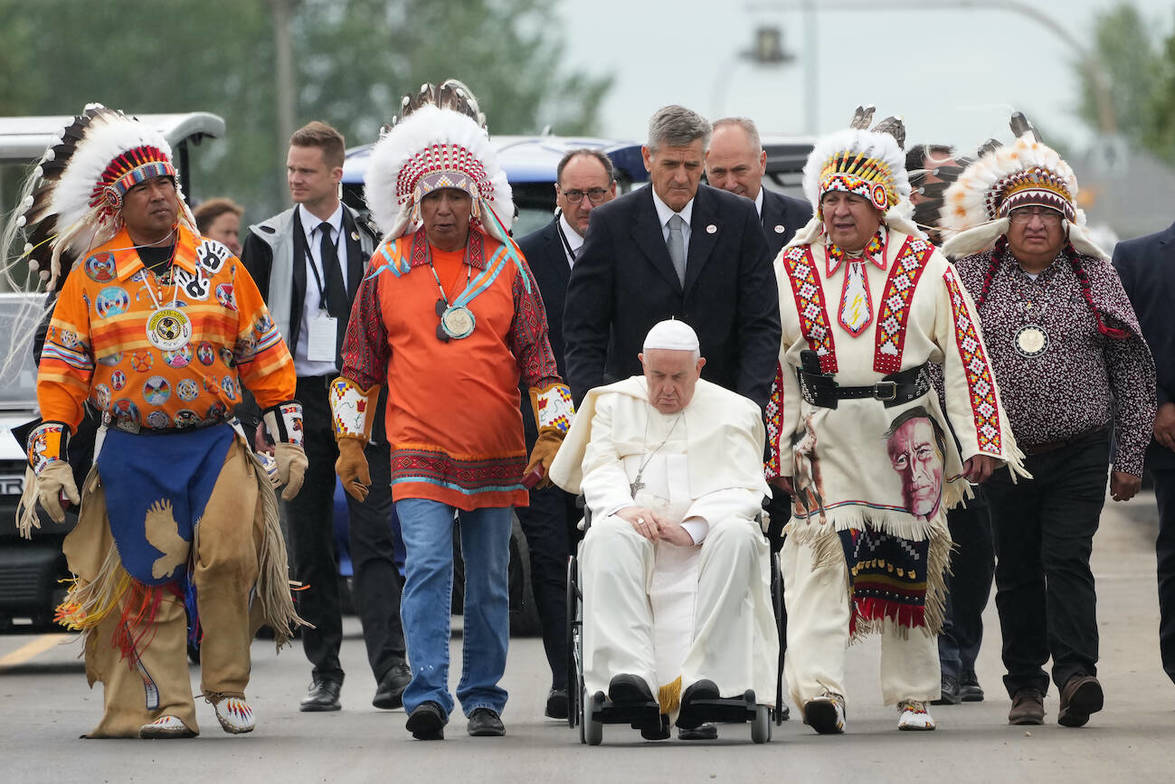 In a much-anticipated speech Monday, surrounded by Indigenous people from across the country, Pope Francis delivered the words many have long waited for: "I am deeply sorry."

The speech was part of the Pope's six-day visit to Canada, which the Roman Catholic leader called "a penitential pilgrimage." In the calls to action released by the Truth and Reconciliation Commission of Canada (TRC) in 2015, the Pope was asked to issue an apology to survivors, families and communities for the church's role in the abuse of Indigenous children in Catholic-run residential schools. It also asked for the apology to happen in Canada.

Rev. Tony Snow saw Monday's apology through many lenses. He's an Indigenous minister for the Chinook Winds Region of the United Church. He's also a Stoney Nakoda First Nation member, a day school survivor and the son of a residential school survivor. He's also part of the ministry team at Hillhurst United Church in Calgary where I have had the good fortune to attend when I visit my daughter.

"I think it did reach the monumental inference that was needed," he said in a Calgary Eyeopener interview. Snow's father went to the Morley Indian Residential School, which was run by the Methodist Church, and later, the United Church of Canada. The United Church has since issued an apology for its role in the residential school system and began working with the TRC. His father, later an ordained minister in the United Church of Canada in Alberta, also helped to try to bring communities together to find a way to move forward. "We work through the issues and perspectives that need to come forward, especially around truth-telling and around the ability for us to get on the same page, to remember that we are both working toward a better future," he said. "I think that this is what will need to happen in the Catholic Church as well."

The apology from the Pope is the first step in that process, Snow said. And as an Indigenous minister himself, he hopes the apology will allow more denominations to work together toward reconciliation. "That institutional change can happen with the input and advice of Indigenous elders, Indigenous clergy and others that are there and working with the church to try to be a support."

September 30th is National Truth and Reconciliation Day, a time when we honour the Indigenous children who were sent away to Residential Schools in Canada, the survivors and their families. It has become a National campaign to raise awareness and provide education about residential schools in Canada.

Here at Glen Morris, guided by the Woodland Cultural Centre, we will have the opportunity to virtually tour the Mohawk Residential School during the lead up to September 30th, as we learn together the tragic history of the residential school system. More information will be shared at the beginning of September, but we do hope that many will join with us for this vital part of the reconciliation process in Canada as it deepens our collective awareness of this history and ensures ongoing reflection for us all.